We’re delighted to launch the new Community area of the Sinchi Tribe site.  Within this area, we will feature inspirational people from around the world, who are instigating positive change in their own way. This could be individuals working with communities, in sustainable projects or artists / musicians who help us connect more deeply to ourselves and the world around us.

Our goal within these interviews, is to hear their stories; what inspires them, how they came on to their path and what obstacles they have / still encounter. In many cases this doesn’t come easy and we hope to inspire future generations that they can also make a difference.

Our first featured guest is Iron Gump from Philadelphia and we couldn’t have asked for a better first interviewee.  Inspirational in where he has come from, for the man he is and above all his intention and service to others.

A figment of my own imagination that I have brought into “reality” to share what I have learned about the world inside and outside of me. 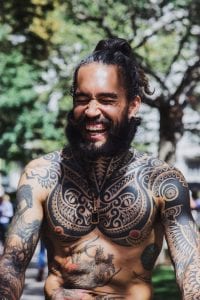 A boy from Camden, NJ who was too curious about the world to stay stuck inside of its constructive and destructive design.

My parents were factory workers who made just enough money to keep us afloat. My dad maintained his crazy/artistic imagination even though he was working day and night, my mom kept a loving belief through hardship and my older brother’s determination opened up the pathways to succeed.

This all made me look closer at life, the world around me and inside of me. I wanted to understand more, so I began observing more of what it is to have / have not emotionally, physically and spiritually.

What obstacles have you encountered in your life / work?

Fear breaks people and helps them ascend to new understandings.

Growing up where I did, you were taught to be a predator or prey and the reality of it was surreal at times. I chose neither and became an observer of both.

The illusions of Failure and Success haunt me occasionally because I am still learning to define them within my existence.

The major obstacle I still face is people’s misguided, uneducated understandings of the world inside of them as well as the world around them. Their disillusion has created a hostile environment that hinders our growth as people. I fight daily with this ignorance because I live my life in a way in which some people don’t understand, so they blindly judge me as I continue to smile at them. 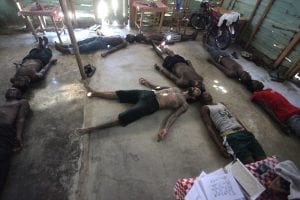 Tell us about the Haiti project

Haiti was a self funded project that photographer Krystle Marcellus and I decided to venture into.

We didn’t know the land, language or the people that we were about to engage with, yet our genuine interest led us into a life changing experience.

She started teaching photography and I was teaching breathwork, yoga and meditation. Things began to move once we established ourselves by gaining trust of some of the village people. She had a group and I was putting one together with the help of Djimmy (Haitian refugee).

At some point I had to change my training method to be more meditative and less physical because they wanted to learn but didn’t have the energy because of the lack of food and water.

Despite all this positive work,  one day I went to the village to find Djimmy in his home with stitches on his forehead and his hand. I didn’t realize till later that I did not go through the proper channels or talk to who was in charge of the village to explain my plans clearly. This in turn created a situation where they thought I was giving Djimmy money so they tried to rob him. We learnt it is equally important to have both positive intentions but also an understanding of the community and its dynamics.

My vision for future project is to work with both indigenous and corporate/business people to better understand how to create a genuine bridge between the two worlds, so that they may coexist.

This will be d 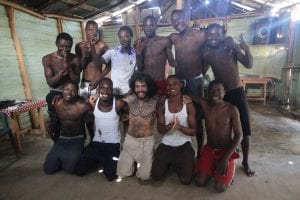 one through music, storytelling, breath and body work as well as listening and sharing wisdom with all sides of the connected spectrum.

For further information on this amazing project you can read more via  irongump.com

Sinchi focuses on the preservation of indigenous culture, what is your view on this?

Preservation has to be more than just sharing these cultures to those who want to save and help them.

They don’t need help. They need to be genuinely educated on the ways of the modern man. So that they can understand how to live in balance without having to sacrifice their land, language, rituals, beliefs or culture.

Their ways of understanding are balanced with nature and their rituals (some seemingly barbaric) are ways of paying respect to this balance.

From their traditional/folk music, we can feel the spirit of land they occupy and by listening to their stories we can learn a great deal about all aspects of living.

We don’t need to protect them we need to assist them in stewarding their culture by exchanging ideas and knowledge.

Finally, we understand you are also working on some of these issues in Hawaii?

I moved to Maui, Hawaii to live with my photographer friend Krystle Marcellus who’s family is native to the island. I didn’t know much about the history because Hawaii is generally seen as a vacation spot.

As I met some of her family, I quickly began to learn about the history of the people and how they are still fighting to preserve their culture, protect their land and live in harmony with others despite their differences.

Krystle’s family taught me about all aspects of a culture that is deeply connected to the land and water that provides them with everything from sacred songs to the food on their table.

Krystle and I began to explore different ways to assist in the preservation of Hawaiian culture. She began documenting stories and eventually got a job working for the Star Advertiser in Honolulu, Hawaii and I began to work closely with locals teaching wellness (yoga, chi gong and meditation) at a local gym (808 fitness), Yoga studio (Body Alive) and at local residences.

Krystle is still documenting and exploring the stories of the Hawaiian people and even though I have moved back to Philadelphia, I still work as closely as I can with my Hawaiian family, to share their stories.