The Xingu River Basin holds the first indigenous reserve in Brasil created by the government in the 1960s. The Xingu Indigenous Park covers about 6,000,000 acres, representing all 4 different linguistic tribal groups within the country: Tupi, Macro-Ge, Carib and Aruak. It’s not completely clear how all these different groups came to seek refuge within the same area of the jungle, but it’s expected they’ve migrated from different parts of the continent. Interestingly enough, although they speak different languages and are of different ethnic groups, they are quite similar in their spiritual beliefsystems, the way they organize their families and values and in their rites of passage. And despite a lot of outside pressure, much of their cultural integrity has remained largely unchanged.

With exception of the Kayapó and Suyá, who are nomads and hunter-gatherers, all the other Xingu natives are sedentary, primarily practicing agriculture and fishing. The crops that they cultivate are the same as before the arrival of Columbus in the 15oos, mainly consisting of corns, potatoes and maniocs. In general, the native of the Upper Xingu have a basic diet consisting of manioc and fish. Relying on natural resources without disrupting the balance of nature, The Xingu people promote respect for all living things, which is why they do not eat any meat besides fish and even then only certain varieties of fish are consumed. Making use of canoes for their transport and fishing, they don’t kill the tree for the construction of their boats, but rather use the highly resistent bark of the native Jatoba tree. 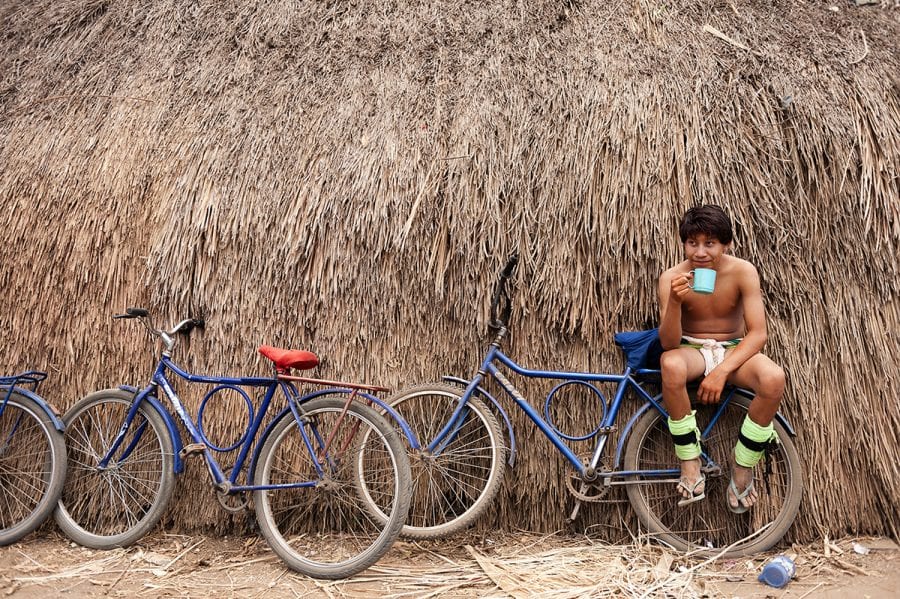 Living in balance with eachother, the Xingu Indians seem to be a very friendly and happy people. Many anthropologists have attributed their well being to the absence of punishment and authority within their respective cultures. Within Xinguano villages, each household has one chief or head that is responsible for the economic activities of the group. The chief of the house is the one who leads the others in the fields, chooses the place, oversees the planting and sowing of the land and everybody agrees it is most beneficial to have one leader to make these kind of household decisions. In contrast, the general chief (cacique) of the village has little physical control over other inhabitants of the village. His primary role is to encourage ceremonial rites. Together with the village shaman, he talks to the whole village every morning from his home. It is believed that it is the forces of tribal cultural that remains the unity of the people, not the authority of one individual and ech and every person has its own freedom and the power to make its own decisions. This freedom is also very noticeable in the way that Xingu parents raise their children. Children are never punished as they are trusted to do the right thing, and therefor granted a lot of responsibilities from a very young age. In general, this means a Xingu child of 12 years old doesn’t misbehave and already has a lot of knowledge about the values and traditions of his of her culture.

Xinguanos belief in the Quarup, which literally means ‘wood exposed to the sun’. Xingu legend holds that the first humans were created by Mavutsinim, the first one to walk the Earth. Because he felt alone, he created 6 peoples out of tree trunks. One night, he went out into the woods and cut three trunks to colour and decorate, each representing a couple of one man and one  woman. He made a fire and sang and made music alongside them in order to wake up their spirit, until the sun started to rise and vivified these sacred logs into human beings. At the same time, fish began to sprung and the jaguar ran out to catch them for ‘the heroes’, which is why in legend the fish are referred to as ‘the common people’; respected but used for the survival of the descendants of Mavutsinim. Eversince, his ancestors have held ceremonies to commemorate their Creators’ efforts to bring them to life and protect, this ceremony is called Quarup. The ceremony is held once a year during a festival in August, bringing together all 4.000 tribal members from all over the Xingu River Basin. Festivities are centered around the celebration of those notable ‘heroes’ who passed away in the year leading up to August.

Quarup is far from a quiet ceremony where people get together to mourn the losses of those notable members of their community. The ritual, which lasts a few days, keeps the tribes joining together to mourn very busily with a wide range of activities, both joyful and somber ones, from start to finish. Music plays an important role throughout the festival. Mourners honor the dead through weeping, singing and playing maracas they have made from calabash gourds around the tree trunks that represent the honorees. These trunks are also called quarups and are planted on the village floor. Family members of those who have died spend time painting and decorating them prior to lighting small fires around them and commencing the honoring through music. While Quarup’s main focus has to do with honoring the notable dead, the annual festival also serves as the time for the presentation of all girls from all the Xingu Indian tribes who have experienced menstruation for the first time since the last event. These young girls now must choose their partners for marriage and this gathering of all the tribes provides exposure. Therefore, they tint their ornament-adorned bodies and dance to honor the dead in front of all the attendees.

Another very important part of the ceremony is huka-huka wrestling. Opponents from different tribes represent the jaguar from the creator-story and face each other in a wrestling match that usually doesn’t last more than a few seconds. The victory is decided as soon as one of the contestants is thrown to the ground or brought to the knees. To an outsider, it might seem as though not much is to be gained from a victory, but the competition isn’t so much about a winner or looser. Huka huka is about testing strength, reaffirming ties between different Xingu tribes and, most importantly, it is about arousing the desire between both genders to create life after death. Both men and women participate in huka huka, but when men are wrestling, the women sing songs about male sexuality. After the matches, girls who were formerly in puberty isolation gift pequi seeds to the chief of their village in a symbolic gesture of signaling their fertility. At the same time, a representative of the village removes her uluri belt, a small triangular ornament worn just above the pubic region.

Eventhough much of the Xingu tribes’ traditions seem to have remained largely unchanged for many century, there isn’t a lot of documented evidence which suggests that huka huka wrestling has been around for just as long. Even more so, many suggest that this peaceful ceremony has been introduced post-Colombus and replaced intertribal warfare in the 17th century. It is likely that the trade between different tribal groups was introduced after the Christianization of Brasil as Jesuit missionaries travelled between different indigenous groups in the Amazone,  introducing a preference for peaceful co-existence over violence. However, little is known about the migration of the indigenous people of Brasil, but it remains highly unique how 4 very different ethnic groups have established such a cooperative way of living with very similar traditions within the Xingu habitat. From the book of Brazilian social scientist Aparecida Vilaca “Native Christians: Modes and Effects of Christianity Among Indigenous Peoples of the Americas”:

‘...the Alto Xingu is characterized by a high level of linguistic diversity, matched by a high level of regional homogeneity. Each village is associated with its own language or at least dialect, but each village is more or less identical to every other one. Similarly, the Alto Xingu as a whole is characterized by an ethic of peacefulness, both personally and between communities, although violence towards people outside of the system remains sanctioned. Such peacefulness has two concomitants: an emphasis on trading as the key relation to the other, and a dramatic development of modes of magical violence.’

* Pictures used in this article were taken by Alejandro Zambrana