It’s with great excitement that we are announcing the release of the Secret Sarayaku project by photographer and visual storyteller Misha Vallejo. The project consists of a book, an interactive documentary and a website. The book was published last month (available here) and the website with the free web documentary will be online here as of June 18th. We’ll follow up with updates on our social media about Misha’s Secret Sarayaku lecture during Lumix Festival on June 22nd (for non-Spanish speakers). For Spanish speakers, there will be a live broadcast of the official kick-off in Quito on June 18th itself (17:00 GMT -5).

Secret Sarayaku is a multimedia project that narrates an ancient life philosophy of the original inhabitants of the Sarayaku rainforest (Ecuador), the so called Kawsak Sacha or ‘Living Forest’. According to the Kichwa, everything in the forest is alive, has a sould and is interconnected. In order to maintain this balance, they act as guardians and protectors of the forest. The web platform as outlined in the Secret Sarayaku project will connect indigenous and western knowledge in an effort to emulate these interrelations of forest elements and everything that’s invisible to us, but very much alive to the Kichwa people of Sarayaku.

The Kichwa have been at the forefront of the growing global movement for indigenous rights and the protection of biodiversity. When Kichwa territory came under threat of large-scale contammination by oil extraction, they installed satellites to report the crises going on in several parts of Sarayaku and in 2012 they won a lawsuit against the Ecuadorian government in the Inter-American court of human rights. But despite all this, the Ecuadorian government has recently concessioned part of their land to Chinese oil companies, which means the fight is far from over. In an effort to protect the forest and its species, the Kichwa came up with the idea to launch a plant encyclopedia, which Misha was asked to document in exchange for his visit:

” May 2015 was the first time I visited the indigenous community of Sarayaku, located in the Ecuadorian Amazon Rainforest. Before giving me access to the community, the then president (and now my friend) Felix Santi, asked me what I was going to give back to them. After all, I was going to receive knowledge. This was the first time I was asked such a question in my career and I felt that it was quite fair: Throughout history, the western man has traditionally come to indigenous communities to gather knowledge, be it in form of anthropological investigations, fauna and flora researches or photo reportages. I answered that I could do any kind of photographic work for them. They told me they were working on a medicinal plant catalogue and needed photos of the plants, so we agreed on that. “

Having lived amongst the community for 3 years, Misha Vallejo has become a trusted advocate for the Kichwa cause. Vallejo’s visual stories are a true and non-stereotypical representation of the Kichwa way of life, at the cutting edge between modernity and tradition; and his unique visual language granted him and the community exposure amongst some major outlets across the world, such as the New York Times and exhibitions of his work at renowned galleries and art institutions across the world.

The Secret Sarayaku multimedia project is an extension of earlier efforts and meant to draw attention towards a threatened magical place. Diving into a world that seems so far removed through a multi-sensory experience might just give you goosebumps. You can watch the trailer here:

Sinchi’s involvement is to share the stories of the Kichwa within our community and with those around the globe, aswel as being a funding partner on the creation side.

Follow Misha on Instagram for more stories and experiences during his time with the Kichwa people: @mishavallejo. 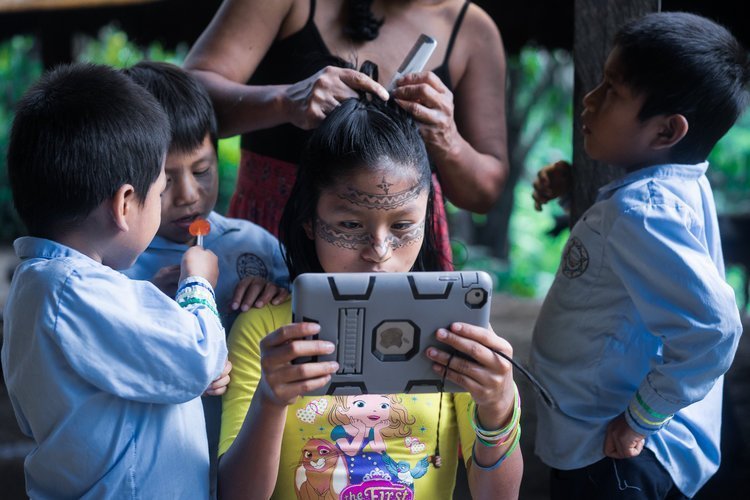